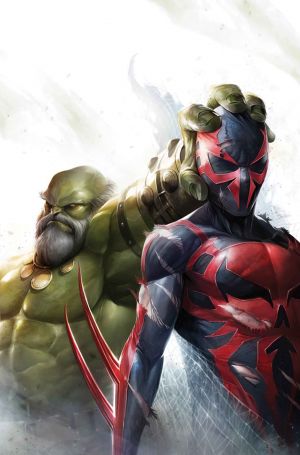 Yes, you read that right. As some of you may know, Marvel has been teasing quite a few storylines for summer, one of them being Future Imperfect. In this series, there was a nuclear war that wiped out most of the Earth’s super-humans allowing a future version of the Hulk - Maestro - to to seize control and rule. Of course, this led to a confrontation between Hulk and the Maestro. Only now, thanks to Peter David, it seems as though Spider-Man 2099 will be incorporated! The tease for the issue shows Maestro holding Spidey's head, and the caption on the bottom reads “Miguel O’Hara returns to the year 2099 to discover that his future is now… imperfect!”

Does this means more dreams are coming true? Possibly.

Source:  Whatever A Spider Can

Video game/comic book scriptwriter, freelancer, and fellow Geek Decor writer. Surely, if you need to combine the research skills of a journalist, and the wording of a storyteller, Jenn is the geek to go to. See more of her work at realwomengame.weebly.com.